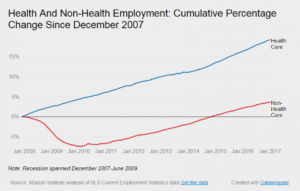 A third of all jobs created in the United States in the past decade have been in health care.

America could lose more than a million jobs if the Senate votes to repeal the Affordable Care Act. That’s according to a report from George Washington University’s Milken Institute School of Public Health and the Commonwealth Fund. “This legislation could single-handedly put a big dent in health care job growth,” said Leighton Ku, the lead author of the report and the director of the Center for Health Policy Research at George Washington University. “We’re talking about one out of every 20 health care jobs disappearing by 2026. That’s a lot,” Ku said.

Since the Affordable Care Act went into full effect in 2014, 1.2 million people have gained employment in health care. Most of the jobs have come in hospitals and outpatient care where people are treated for non-emergencies. Many hospitals have seen their “bad debts” drop substantially since more patients have been able to pay since the ACA was enacted. That has allowed hospitals to expand services — and jobs.

Republican’s don’t care about people or jobs. They only care about cutting taxes for the wealthy — that’s what everything going on in the Senate this week is about.