Flagstaff, AZ, March 22, 2017 – The Eleanor Roosevelt Award is presented annually to members of our community whose work and service to the people of Coconino County embody the ideals of Eleanor Roosevelt. 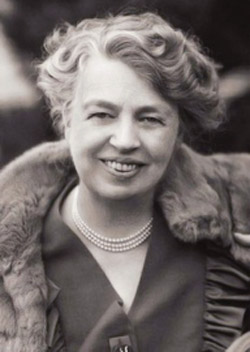 Though she never held elected office, Mrs. Roosevelt was viewed as a tireless defender of the average American.  She was the champion of the underdog. She said, “I see it as our duty to comfort the afflicted, and to afflict the comfortable.”

It is with Mrs. Roosevelt’s example in mind that the Coconino County Democratic Party honors the following nominees for the 2017 Eleanor Roosevelt Award:

Robert Breunig, President Emeritus of the Museum of Northern Arizona, defends the value of the arts and sciences at a time when those pillars of society are under attack and devalued. He brought the Museum back from financial crisis. Dr. Bruenig has devoted his career to passing on a sense of love and responsibility for our home, the Colorado Plateau, including strengthening the relationships with Hopi, Zuni, Navajo tribes, and the local Hispanic community.

Frank Garcia is a Flagstaff native who graduated from South Beaver School and returned as its principal. He served there until South Beaver closed and then became principal of Thomas School. He has served as a mentor and sterling example for the children he shepherded, making an indelible impression on countless youngsters and serving as an inspiration for us all.

Patty Garcia, also a Flagstaff native, is a math whiz who worked on the first moon-landing vehicle when it was built here in Flagstaff. She is Chair of the Governing Board of Coconino Community College, a United Way Board Member and a past president of the Coconino County Planning and Zoning Commission. As a leader on many other county boards and commissions, she is someone to whom we are most grateful.

Robert Kelty has dedicated his career to enriching the lives of children of all backgrounds. He is committed to the ideal that every child can do amazing things if given the opportunity. He has taught on the Navajo Nation, been the Coconino County Superintendent of Public Instruction, and is now principal of our tri-cultural Puente School, where he is working to develop a program that is on par with high-achieving programs across the country.

Stephen Nuno teaches in the Political Science Department at Northern Arizona University where he serves as faculty advisor to the Young Democrats. During the election, he served as Latino correspondent for MSNBC. He makes regular contributions to NBC News-Latino and has done extensive research on voting, politics, and the Latino Community.

Beth Otterstein is a hero in the continuous fight to offer affordable, safe, comprehensive health care to women.   Her commitment to the principle that women are capable of making their own health decisions has provoked constant opposition, which she faces with grace and courage. Beth now serves as Medical Director for the Northern Arizona Center Against Sexual Assault.

Steve Peru retired as County Manager after 32 years of service to the County. During his term as Manager, 2006-2011, the County weathered the country’s greatest recession since the 1930s, built a new jail, and restored and expanded our county courthouse. Steve serves as a member of the governing board for First Things First and has been a volunteer in many other capacities. After years of volunteer service to United Way, Steve became its chief executive, a capacity in which he continues to serve today.

Lori Poloni-Staudinger is Chair of the Political Science Department at NAU. Since the election, Lori has encouraged hundreds of women and men to become politically involved through the organization she founded, Together We Will, Northern Arizona. Together We Will sponsored the Women’s March Flagstaff and continues to raise political awareness in our community. Together We Will activities have raised money and contributed to Planned Parenthood, Victim/Witness Services, and the Northern Arizona Dream Fund.  Lori’s daily work continues to inspire political activism at the state and national level.

Eva Putzova ran her campaign for City Council as a proud Democrat on the theme of “Shared Prosperity” for all residents of Flagstaff. She led the 2015 lawsuit that struck down the Arizona Legislature’s attack on the autonomy of Charter Cities. She led the initiative campaign to raise Flagstaff’s minimum wage. Eva worked with our indigenous residents to change the Columbus Day holiday to Indigenous Peoples Day. She continues to lead the efforts to provide affordable housing to Flagstaff.  Eva came to the U.S. from Slovakia in 1998, moved to Flagstaff in 2001, and became a U.S. citizen while residing here. Her service to our community began with her board membership and subsequent presidency of Friends of Flagstaff’s Future, where she tackled the difficult issues of zoning, climate change, clean energy, and social justice. Eva was an early supporter and organizer for the Bernie Sanders campaign and served as a delegate to the Democratic National Convention in 2016. Eva has been a champion of the many values reflected in the Democratic Party Platform, including raising wages, expanding access to affordable housing, ending systemic racism, guaranteeing civil rights for people of color and women and the LGBT community, honoring indigenous people and tribal nations, combating climate change, and building a clean energy economy.

The winner of the Eleanor Roosevelt Award will be announced at the 17th Annual Roosevelt-Kennedy Dinner at the Doubletree by Hilton on Saturday, March 25.

If you would like more information about this topic, please contact Ann Heitland, Communications Chair at 928-699-4299 or email at