The Eleanor Roosevelt Award is presented annually to members of our community whose work and service to the people of Coconino County embody the ideals of Eleanor Roosevelt. On February 10, the Executive Committee approved the nominations received for 2018. The award winner will be announced at the Roosevelt/Kennedy Dinner on March 10. 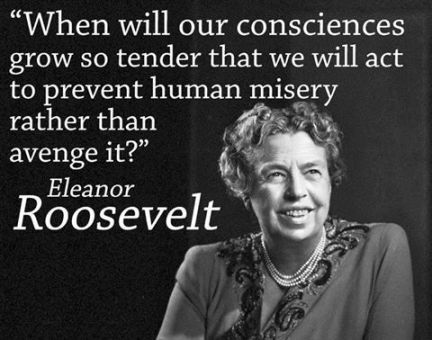 In her day, Mrs. Roosevelt was told to “attend to her own knitting,” but she refused. For decades, she wrote a daily newspaper column, traveled to spread FDR’s message, and pushed FDR’s administration toward more progressive policies. Truman appointed Eleanor Roosevelt to represent the United States at the first United Nations meeting.  She said, “I see it as our duty to comfort the afflicted, and to afflict the comfortable.” She was, no doubt, the “Nasty Woman” of her day.

This year’s nominees are:

Helene Babbitt – Founder of Flagstaff Indivisible. Last year, Helene pulled together a diverse group from the Flagstaff Community to form a local chapter of Indivisible. The group has lobbied, held candidate forums, and hosted the Flagstaff Kickoff for the Arizona Dirty Money initiative.

Greta Murphy – Greta actively participates in numerous community groups, working for causes related to healthcare, immigration, sensible gun laws, and housing. In the last year, in association with the group Cover Arizona, Greta worked to overcome the Trump Administration’s outreach cutbacks by assisting and encouraging low-income people to sign up for health insurance under the Affordable Care Act. She tabled at events and canvassed some of our poorest neighborhoods seeking those most in need.

Lori Polini-Staudinger – President, Founder, and Executive Director of the 501(c)(4) known as Together We Will, Northern Arizona. Under Lori’s indefatigable leadership, this organization has inspired nearly 2000 members to be politically active in a variety of ways, through marches and rallies, postcard writing, and sponsoring speakers and exhibits to raise funds for regional non-profits.

Bill Pribil – Our retired County Sheriff was always proud to run for office as a Democrat and espoused Democratic values as he campaigned and worked. During his tenure as Sheriff, Bill initiated the Exodus program at the County Jail, trained officers in violence prevention, and developed good working relations with the Navajo Nation.

Buy Tickets to the Roosevelt-Kennedy Dinner