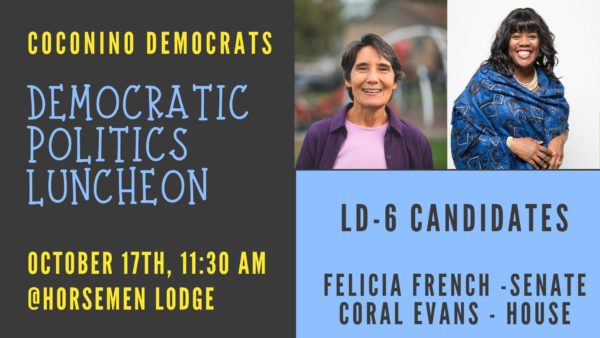 We’ll be hosting this month’s event at Horsemen Lodge in the Doney Park area. Our guests are the Democratic Candidates for the Arizona Legislature: Col. (retd) Felicia French for Senate and Mayor Coral Evans.

Colonel (Ret) Felicia French is a third-generation Arizonan, who grew up in Phoenix, AZ but has now lived in rural Arizona for more than six years. She has a proven commitment to public service, and family well being which she has shown by taking on the roles of a combat veteran, MedEvac helicopter pilot, registered nurse, an educator, and a single mother, Felicia has her B.S. in Nursing, her M.S. in Management and an M.S. in Sustainable Solutions. During her military career, she also received training in Alternative Dispute Resolution techniques and in mediation- making her a strong bipartisan candidate.

Her leadership skills were formed through her many experiences by working her way up the ranks from Private to Colonel over 32 years serving in the United States Army and Arizona National Guard, as a medic, nurse manager, medevac helicopter pilot to a and senior medical advisor, and through mentoring at-risk youth to becoming an educator at Mesa Community College.

Felicia is known to be accomplished in leading organizations during multiple deployments, including a combat tour in Afghanistan, and humanitarian missions in Honduras and the Dominican Republic. Learn more about Felicia’s vision for service here.

Mayor Coral Evans has served on the Flagstaff City Council since 2008, most recently as Mayor.  Coral holds a master’s degree in Business Administration, a master’s level certificate in Public Management, a Bachelor’s degree in Business Management.  She has over 25 years of extensive, applied experience and knowledge in the design, development, implementation, management, assessment, and evaluation of initiatives and programs crafted to assist diverse populations experiencing the systemic effects of poverty.  Coral states that she is “running, for education, small businesses, and local control in northern Arizona.”  Learn more about Coral’s vision for service here.