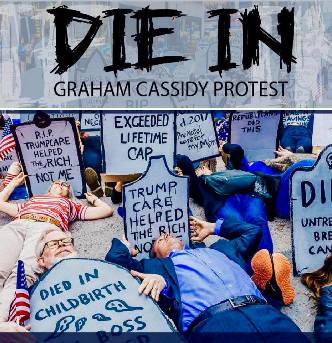 Join Nationwide DIE IN’s to protest the deadly repeal of the ACA. Monday a 2 hour Senate hearing on Cassidy-Graham will occur before a vote later this week. Trumpcare aka the AHCA, will kill 500,000 Arizonans and 6,000 vets. Republicans are looking for money from cutting health care to use for tax cuts for the wealthy.

Join this national movement in demonstrating People Before Profit! We stopped the repeal before now let’s kill the bill and lay it to rest. No grieving for Bipartisan solutions to saving our healthcare!

Signs: tombstone with how the AHCA killed you or someone you love.

If you’d like to speak, please come prepared to share your story in 2-3mims. Please let someone with a megaphone you would like to Speak out and share your story. Put a face so McCain knows whose life he is sentencing.

A Die In is a form of nonviolent direct action protest where participants publicly pretend to die to highlight a deadly problem. Grassroots organizations will be holding one at McCain’s office Monday 3-6 pm and all over the state of AZ and the US.

Its origins are hard to pin down, but it was notably used to powerful effect by ACT UP during the 1980s AIDS crisis and more recently by the Black Lives Matter movement during the Ferguson protests. This tactic is most powerful if done at the closest district office of a Representative, or at a public or private event at which the Representative is in attendance. This is a tactic designed to attract attention from passersby and people in positions of power and can be used to disrupt business as usual at a problematic institution. It holds most power if media attend the event and/or if photos and video are shared through social media.