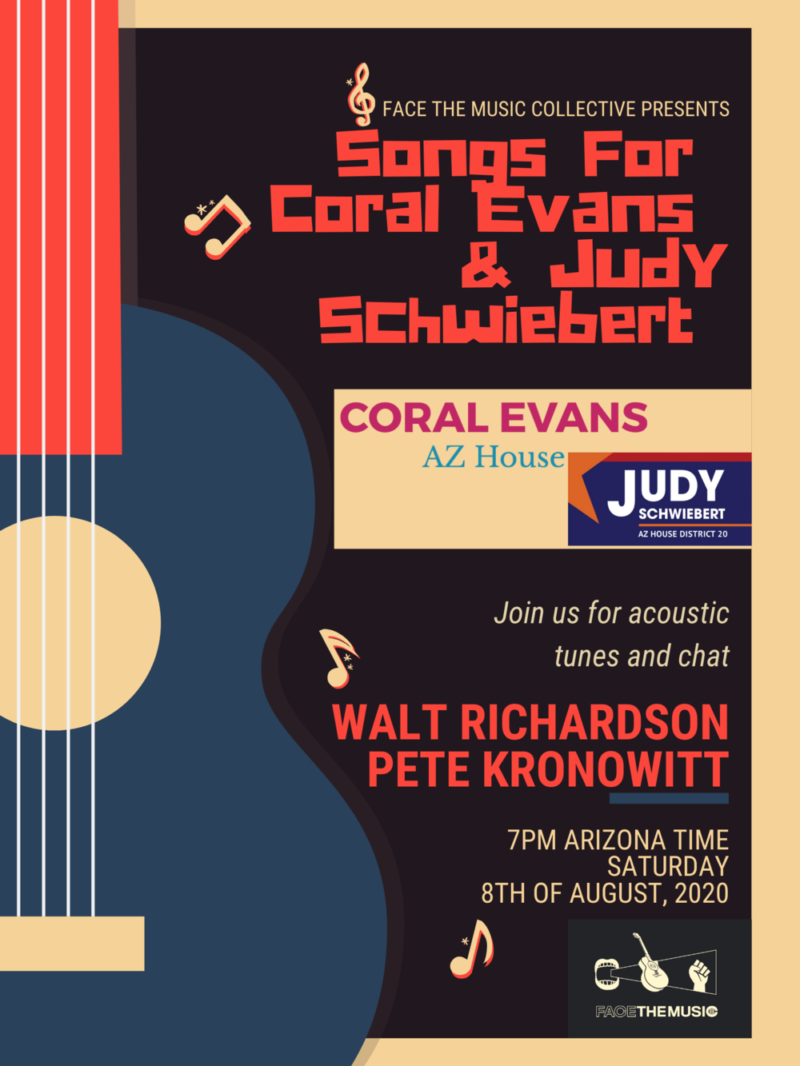 Arizona needs two seats in the House to flip the legislature so this Saturday LD-6 Candidate Coral Evans is teaming up with LD-20’s Judy Schwiebert for a special night of music with Face the Music. We’re excited to feature Coral and Judy as well as our special musical guests Walt Richardson & Pete Kronowitt!

Walt Richardson is a soul, living out and enjoying life as a songwriting, storytelling, and performing musician. He is a celebrated music veteran in the Tempe, Arizona area where his humanitarian contributions to the music community and music in schools (with an emphasis on cultural diversity), have been recognized with numerous awards including the Arizona Music and Entertainment Hall of Fame. There is even a Tempe, AZ Declares Walt Richardson Day. His music derives from Folk, Rock, Reggae, and added African and Latin influences. Walt’s influences include The Beatles, Jimi Hendrix, Cat Stevens, Bob Dylan, Creedence Clearwater, Sly and The Family Stone, Bob Marley, Stevie Wonder, Parliament and many others while sharing the stage with bands ranging from Third World to Ziggy Marley. http://walterrichardson.com/

Pete Kronowitt combines performing, touring and activism. If Steve Earle and Elvis Costello got pissed enough to write political tunes, they would sound like Pete Kronowitt songs. Pete writes songs with hooks, a dash of alt-country, a smidgen of something familiar yet new; catchy songs ranging from acoustic alternative pop and country to Indie with progressive lyrical phrasing but who likes being categorized? Pete founded Face the Music Collective, a guide for creative activists utilizing performances to inspire targeted individual action, one event at a time. Pete’s new album, Do Something Now, is targeted for a 2020 September release. http://www.facebook.com/petekronowittmusic Spotify, SoudCloud, Apple Music

Campaigns are stressful, even more so in these times. I think we all could use a night to come together. As always, donations are appreciated but not required. You can join us here.