Hot Topics: Should We Want More Democracy or Less? 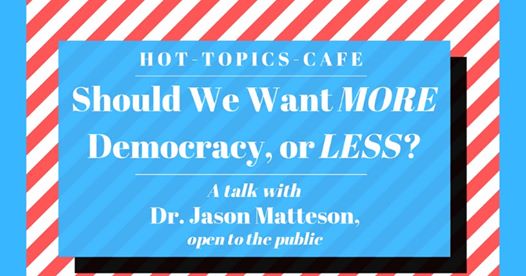 Voter suppression and gerrymandering seem undemocratic. Some argue for the elimination of the Electoral College, which has seated five presidents that lost the national popular vote. Newly piloted vote-counting proposals, like ranked-choice voting, may better express popular will. Many have railed against the success of small minorities in blocking popular proposals on health care, gun control, and environmental law. These observations suggest we should want more democracy. However, others cite reasons for thinking that U.S. democracy is terminally broken: uninformed voting, misconceived voter-initiatives, foreign election interference, dark money, an untrustworthy media, and vengeful polarization. We will discuss which aspects of U.S. democracy should be kept, and which aspects should be revised or eliminated.