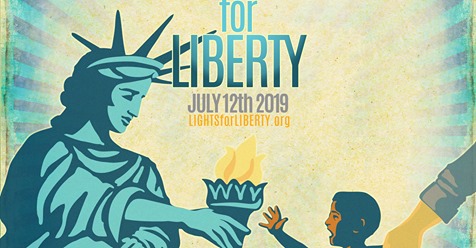 Together We Will, NAZ will provide battery operated candles. Please return after use. NOTE, please arrive at 7 pm, we will switch on lights at dark.

Sign making in Wheeler part at 5:30 in advance of the vigil. Bring a picnic, make some signs.

We are a coalition of people, many of whom are mothers, dedicated to human rights, and the fundamental principle behind democracy that all human beings have a right to life, liberty and dignity. We are partnering with national, regional and local communities and organizations who believe that these fundamental rights are not negotiable and are willing to protect them.

On Friday July 12th, 2019, Lights for Liberty: A Vigil to End Human Detention Camps, will bring thousands of Americans to detention camps across the country, into the streets and into their own front yards, to protest the inhumane conditions faced by refugees.

Across this country, we have witnessed acts against people fleeing persecution many of us thought we would never see in modern times.

At Trump’s human detention camps, teen mothers and babies are held outdoors in “dog pounds.” We have witnessed the sick and elderly confined to “icebox” rooms for weeks at a time. Unbelievably, children as young as 4 months are taken from their parents, medicine is confiscated, and medical care withheld, and LGBTQ and disabled individuals are held in solitary confinement.

“The Trump administration’s immigration policies and detention camps meet the United Nations’ definition of genocide and crimes against humanity,” said Elizabeth Cronise McLaughlin, lawyer, activist and organizer. “Congress is refusing to stop the president and his policies. We cannot allow these atrocities to be perpetrated in our name.”

Perhaps most terrifying, refugees are beginning to be moved onto military grounds, where there will be a complete lack of oversight from the media, lawyers, and human rights monitors. Many of us thought we would never see anything like this in modern times.

“Now is the time for every person to stand up and say, ‘We will not accept this!’ No more hesitating. No more denial. No more fear. We need to be bold, and loud, and unrelenting. That’s the only way we can stop this,” said Kristin Mink, activist and organizer.

Lights for Liberty seeks to create this event in solidarity and allyship with communities most impacted by the abuse of our immigration system. We seek to work in solidarity with grassroots organizations both new and historic, those who are well-funded and on shoe-string budget. We are moved to mobilize with anyone: moms, dads, and people of moral conscience who cannot stand to see families and communities destroyed.

Simply put, our country is at a tipping point.

On July 12th, Lights for Liberty will shine a light on the horrific abuses of the Trump administration in human detention camps.

People will begin arriving at 8pm local time at locations around the nation. At five main locations, legislators, activists, and organizers will speak until 9pm.

At 9 pm local time, at every detention camp (there are more than 200+ and at least one in every state), and in cities, towns, and homes around America, a silent sea of candles will light up the nation.

El Paso, Texas, where migrants are being housed in outdoor conditions under a bridge with no running water for months at a time, is the anticipated site of the main Lights for Liberty vigil. Legislators, activists, organizers, and members of impacted communities are expected to speak.

Other key events are planned in:

Homestead, FL, at a migrant child detention facility that has caused mass abuse and neglect;

San Diego, near the point of entry site from Tijuana;

New York City, at Foley Square, where hundreds of migrants are processed through detention a day;

and Washington, DC, in front of the Capitol building, to demand action from Congress to end human detention and impeach the President.

Details of exact vigil locations will be announced in the coming days.

We welcome all individuals and organizations who support an end to human detention camps to participate in a main or local event. Please email us at if you or your organization is interested in sponsoring or supporting an event in your area.

These events are being funded entirely out of the pockets of our organizing team. We have no sponsors and will not be asking for any financial contribution for these events.

We will invite the public to directly contribute to organizations supporting migrant refugees on the donations page of our website.

This moment has the opportunity to be a turning point in our nation’s history, a moment in which we bring these camps out of the shadows, stop America’s rapid slide into unspeakable horror, and demand that our country stand up for the values it strives to uphold.

We invite you to stand beside us on the right side of history on July 12th.

And in the interim, from now until the end of this administration and its horrific policies, we invite you to light a candle in our window to keep vigil for all those still held in Trump’s detention camps, and all those persecuted, marginalized and harmed by this administration.

For a press release with all the details shared above, go to https://bit.ly/2Isbf1S .