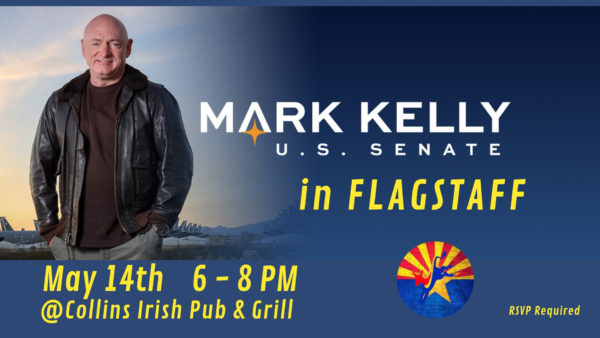 RSVP to this event using this link.  Coconino County Democratic Party is hosting this event for interested Democrats to become acquainted with this Candidate for U.S. Senate and to build enthusiasm for voting in the 2020 Election. This is not an endorsement of the candidate because he is not yet the nominee of the Democratic Party.

Mark is the son of two police officers, and he attended public schools from elementary school through the U.S. Merchant Marine Academy and U.S. Naval Postgraduate School. As a naval aviator he made two deployments to the First Gulf War on the aircraft carrier the U.S.S. Midway and flew 39 combat missions in Operation Desert Storm

Mark was selected as an astronaut in 1996 in the same class as his twin brother Scott. He flew his first of four missions into space in 2001 aboard Space Shuttle Endeavour, the same space shuttle he commanded on its final flight in May 2011. Mark has spent more than 50 days in space, and has lived on the International Space Station. His identical twin brother, Scott Kelly, is also a retired U.S. Navy Captain and astronaut who served aboard the International Space Station on a yearlong mission.