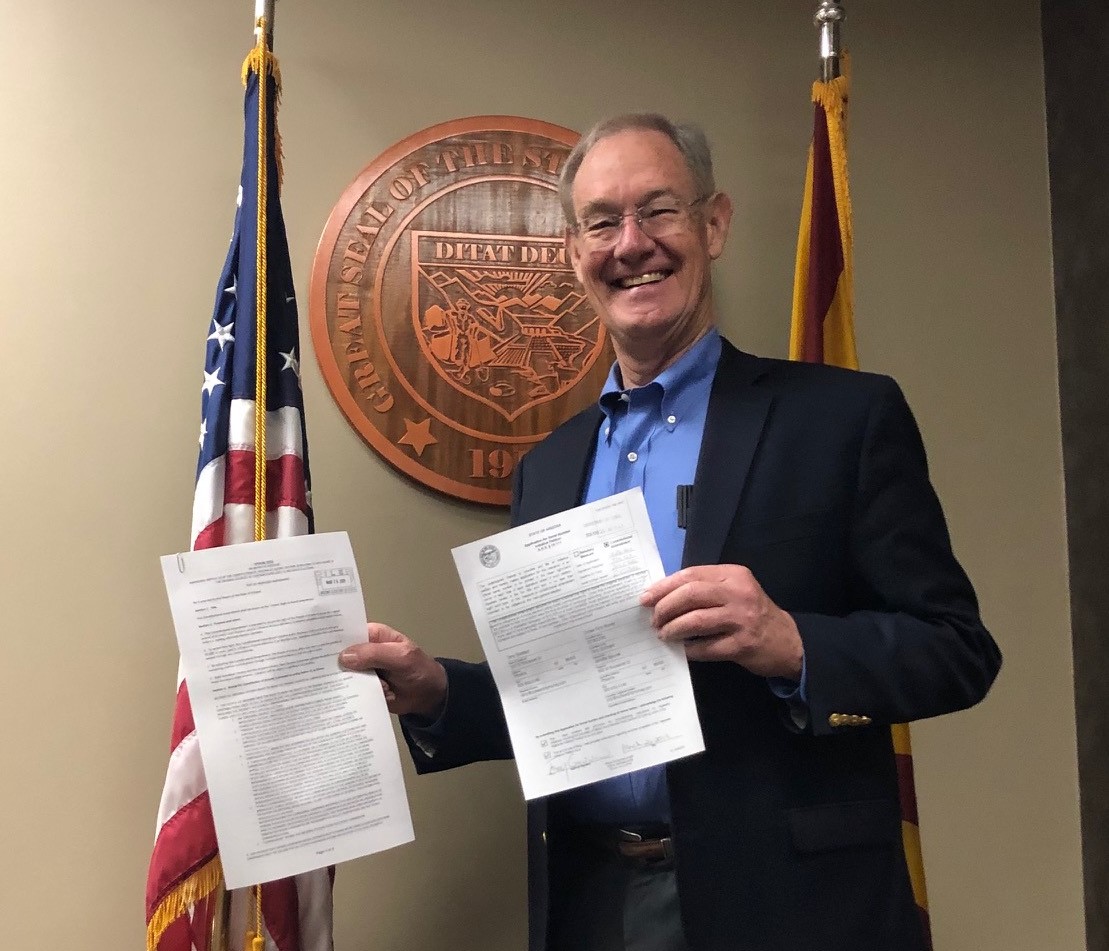 Former Arizona Attorney General Terry Goddard will make a local area appearance on Tuesday, April 16 as part of a tour launching the “Outlaw Dirty Money” petition campaign.   Mr. Goddard will be the featured guest at the monthly meeting of the Yavapai Democrats in Cottonwood, at the Red Rooster Café, 901 N. Main Street, Cottonwood.  The program begins at 6 PM.

Mr. Goddard, who also served four terms as Mayor of Phoenix, is currently heading Outlaw Dirty Money, a statewide volunteer group working to place a constitutional amendment on the 2020 ballot to require certain “Right to Know” regulations on campaign contributions and expenditures.  The aim is to increase transparency in elections and require disclosure of campaign donors.  The initiative proposes that any non-profit spending more than $20,000 on a statewide campaign or $10,000 on a local race would have to disclose all donors who contributed $5000 or more.

A 2018 attempt at a similar ballot initiative fell short of the 225,963 valid signatures that were needed, in large part because of a series of laws passed in recent years that have made it more difficult for citizen initiatives to succeed in actually reaching the ballot.

It will be even more difficult to qualify for the 2020 ballot.  Due to last year’s high voter turnout, the new number of required signatures the group will need is up another 125,000 for a total of 357,467. The campaign to qualify a place on the 2020 ballot aims to gather 500,000 signatures through a volunteer petitioning drive.

“Nearly 300,000 Arizonans made their voices heard in 2018 and said they demand a right to know who was spending to influence their elections,” said Goddard, “Dark money forces, afraid of losing their anonymity, took us to court to deprive those citizens of their rights. We are starting earlier, we building bigger, and we will not let them stop us this time.”

A Tucson native and ASU College of Law graduate, Terry was elected Attorney General in 2002 and reelected in 2006. During his 8 years in office, he won national attention for protecting consumers and fighting transnational organized crime. He made significant progress in attacking drug cartel money laundering, seizing approximately $20 million and negotiating an historic $94 million settlement with Western Union in February, 2010. That year, Terry received the Kelly-Wyman Award, the highest recognition given by his fellow Attorneys General, in recognition of his excellent work fighting border crime and consumer fraud.

Terry was elected Mayor of Phoenix four times, leading the City from 1983 to 1990. In those years, the City greatly increased citizen participation in government, expanded and modernized law enforcement, revitalized downtown, and set up nationally recognized programs in economic development, the arts and historic preservation. He put together the Phoenix Futures Forum, an innovative public goal-setting effort that engaged almost 10,000 citizens in planning the future of their City. Terry was named “Municipal Leader of the Year” by City and County Magazine and was elected President of the National League of Cities in 1988. Phoenix was recognized as an All American City during his tenure.

Terry was elected to the Board of the Central Arizona Water Conservation District in 2000, stepping down when he became the AG in 2003. He was elected to another term on the CAWCD Board in 2012 representing Maricopa County. From 1995 to 2002, Terry was the Arizona Director for the U.S. Department of Housing and Urban Development (HUD). Prior to attending law school, Terry served on active duty in the US Navy from 1970 to 1972. He retired as a commander after 27 years in the Naval Reserve.

Currently, Mr. Goddard is Senior Counsel with the international law firm of Dentons, and a Professor of Practice at ASU’s School of Public Affairs. In 2012, he was selected a Wasserstein Fellow at Harvard Law School. Terry has written and spoken extensively about law enforcement issues involving the Southwest border as a Senior Fellow at the American Immigration Council and a Distinguished Associate at the Morrison Institute of Public Affairs.