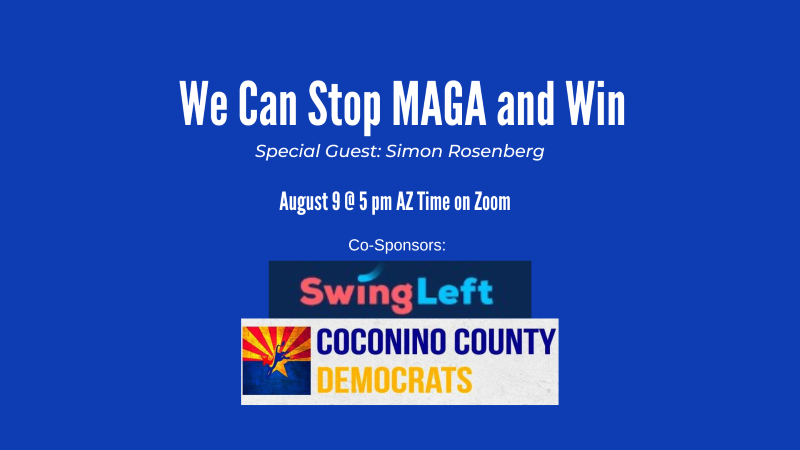 If you’ve had a rock in your stomach since SCOTUS handed down so many horrifying decisions in June–then this meeting offered by a coalition of national grassroots activist groups and featuring a very special guest is one you absolutely don’t want to miss.

The media was forecasting a Red wave for November, but everything changed post-Roe. Don’t take our word for it — hear directly from the founder of the New Democrat Network think tank, Simon Rosenberg, whose recent political talk “A New, Bluer Election” has inspired viewers, activated our defiance & lifted our hearts to WIN!

Simon’s message, in a nutshell: poll after poll is proving that contrary to belief, this year is going to be just like the last 2 elections, decided by the overwhelming anti-MAGA majority in this country.

Simon will join us to share his very latest data and analysis and take our questions. We’ll also share a quick intro to the actions you can start taking from home, wherever you are or talking with swing voters in person.

It’s plain to see that this November, MAGA Republicans are running on the Big Lie up and down the ballot to try to lay the groundwork for a better coup in ’24. But if we push back now, we can stop them by holding the U.S. House and adding 2 seats to our Senate majority. Then, we can finally codify Roe, ensure Voting Rights, protect our elections, defend LGBTQ+ rights, and take real action to prevent a Climate disaster.

Holding CD-2 – Tom O’Halleran’s seat – is key to holding the House. Re-electing Mark Kelly to the U.S. Senate is key to improving Democrats’ majority in the U.S. Senate. Arizona and Coconino County, in particular, play a critical role in both races as well as important statewide races for Governor, Secretary of State, Corporation Commission, and Attorney General.

Together, we Dems can listen to experts like Simon, feel the power of our massive anti-MAGA majority, and get out there on the field to give this election everything we’ve got. Just like we did in ’18 and ’20. Because when we do, every time, we win.

Coconino Democratic Party is co-sponsoring this event with Swing Left. If you haven’t heard of it, Swing Left is a national network that helps people find high-impact ways to support Democratic candidates. It focuses on the most flippable races as an important step towards ensuring the progressive change needed to create a more inclusive and equitable government and society.