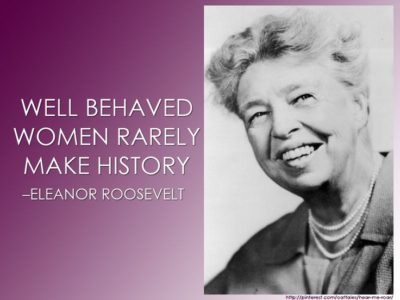 We’re not saying that Professor Lori Polini-Staudinger isn’t “well-behaved” but she surely has stirred things up in Flagstaff since the 2016 election. For that, the Coconino County Democratic Party awarded her its 2018 Eleanor Roosevelt recognition.

Each year, the Coconino County Democratic Party searches for a community member who lives up to Eleanor Roosevelt’s famous statement, “I see it as our duty to comfort the afflicted, and to afflict the comfortable.”

Lori is President, Founder, and Executive Director of the 501(c)(4) known as Together We Will, Northern Arizona. Under Lori’s indefatigable leadership, this organization has inspired nearly 2000 members to be politically active in a variety of ways, through marches and rallies, postcard writing, and sponsoring speakers and exhibits to raise funds for regional non-profits.

Thank you, Lori, for your hard work and activism!

Post Script: One year later, we’ve learned that the quotation in the image is incorrectly attributed to Eleanor Roosevelt! It actually comes from Pulitzer Prize winning historian Laurel Thatcher Ulrich.