About 80 Democrats turned up for the first Monsoon Picnic in memory that wasn’t rained on! After conducting our quarterly business meeting, Party Chair Nathan Jones introduced January Contreras, who is running for Attorney General of the State of Arizona. We also heard from Superior Court Judicial Candidate Ted Reed and Paul Deasy, who is a candidate for Flagstaff City Council. Superior Court Clerk Valerie Wyant told us she would run for reelection and asked for our support while explaining the duties of her office. County Recorder Patty Hansen spoke about her office’s vastly important role in elections. 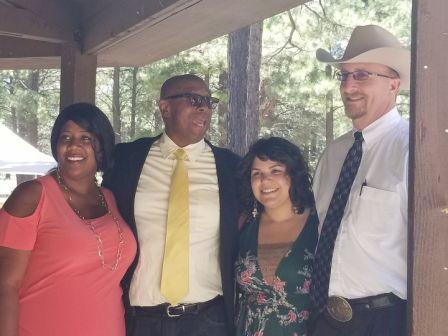 Mayor Coral Evans announced that she will run for a second term as Flagstaff’s mayor in 2018 and urged Democrats to step up
to run for City Council.

Two of three candidates who have announced their runs for Legislative District 6 positions in the Arizona legislature introduced themselves and took questions from the crowd.

Then we mingled, talked politics, ate some great food, and sheet-caked.  The unused food was donated to the Flagstaff Family Food Center.