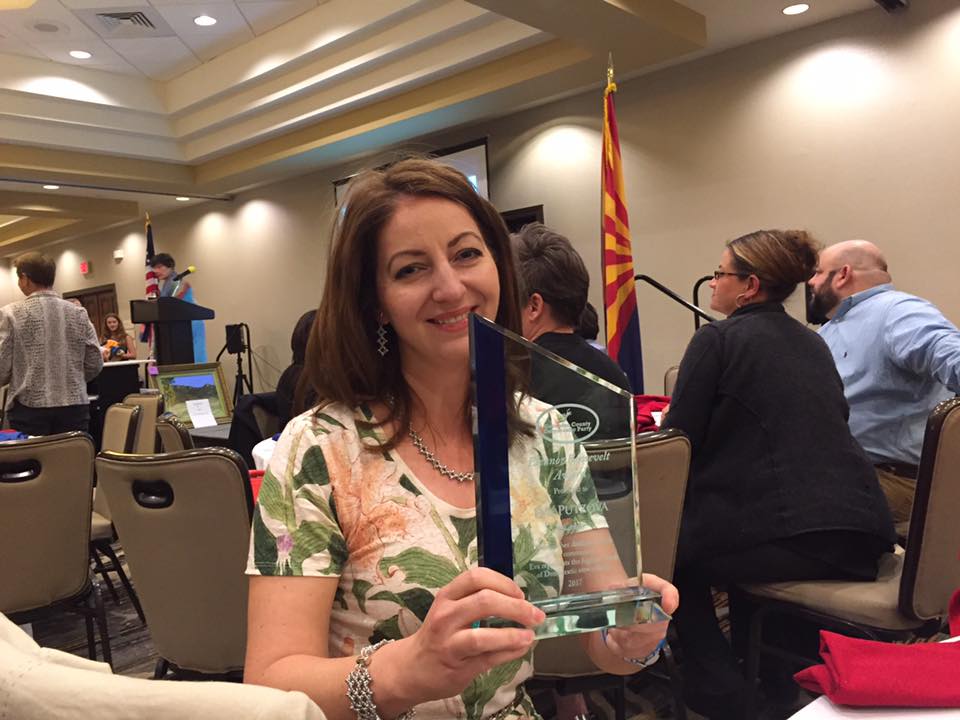 Eva Putzova was awarded the annual Eleanor Roosevelt Award on Saturday. In the words of Chair Nathan Jones, it takes a special person to campaign hard for an initiative, win, and then come back and lead a compromise for the welfare of the community. Eva has done that and so much more.

Eva ran her campaign for City Council as a proud Democrat on the theme of “Shared Prosperity” for all residents of Flagstaff. She led the 2015 lawsuit that struck down the Arizona Legislature’s attack on the autonomy of Charter Cities. She led the initiative campaign to raise Flagstaff’s minimum wage. Eva worked with our indigenous residents to change the Columbus Day holiday to Indigenous Peoples Day. She continues to lead the efforts to provide affordable housing to Flagstaff.  Eva came to the U.S. from Slovakia in 1998, moved to Flagstaff in 2001, and became a U.S. citizen while residing here. Her service to our community began with her board membership and subsequent presidency of Friends of Flagstaff’s Future, where she tackled the difficult issues of zoning, climate change, clean energy, and social justice. Eva was an early supporter and organizer for the Bernie Sanders campaign and served as a delegate to the Democratic National Convention in 2016. Eva has been a champion of the many values reflected in the Democratic Party Platform, including raising wages, expanding access to affordable housing, ending systemic racism, guaranteeing civil rights for people of color and women and the LGBT community, honoring indigenous people and tribal nations, combating climate change, and building a clean energy economy.