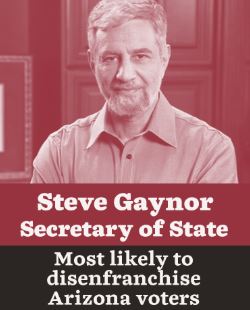 We all know Doug Ducey, but the guy who would succeed him if he leaves office before finishing his next term as Governor (should he win) could be even worse. The Republicans just nominated businessman Steve Gaynor to be Secretary of State — the 2d highest executive office in the state. The Secretary of State automatically fills the office of Governor is the Governor leaves — this is how we got Jan Brewer (remember how bad that was!)

During the primary race against incumbent Michele Reagan, Gaynor advocated for banning the printing of ballots and other election materials in Spanish, arguing that they should only be in English. Furthermore, Gaynor called for repealing the 1975 amendment to the federal Voting Rights Act that, thanks to a history of discrimination by many states—including Arizona itself—requires jurisdictions with large populations of non-English speakers to provide election materials in voters’ native languages.

Given that record of discrimination in a state that’s one-quarter Latino or Native American, it’s astonishing that a candidate would openly advocate for a measure that could make voting considerably more difficult for so many. But with Republicans escalating their voter suppression efforts thanks to a Supreme Court that seems determined to eviscerate the Voting Rights Act, Gaynor’s proposal isn’t an empty threat.

Contrast this with Katie Hobbs, our candidate, who advocates for automatic voter registration and making voting easier everywhere.