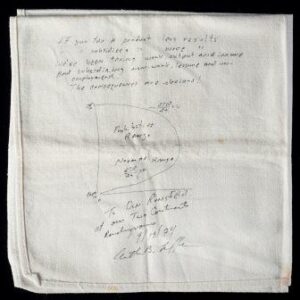 Arthur Laffer in 1974 sketched a curve meant to illustrate his theory that cutting taxes would spur enough economic growth to pay for the tax cut. More than 40 years after those scribblings, Trump announced a “yuge” tax plan that revives the so-called Laffer curve. Mr. Trump’s advisers argue that deep cuts in corporate taxes will ultimately pay for themselves with an explosion of new business and job creation. President George H.W. Bush called it “voodoo economics.”

Nonetheless, Ronald Reagan and George W. Bush put it to the test, enacting deep tax cuts that created “yuge” deficits. And, that’s why Trump’s plan is DOA. Republicans today won’t stand for larger deficits and there is not enough to cut elsewhere in the budget to cover this proposal.

Of course, there is so much more that is wrong with Trump’s plan, including elimination of the estate tax on estates over $10 million and of the alternative minimum tax (which would have saved the current POTUS $30 million in taxes in the one year for which we have a partial tax return).  It’s a gift to the wealthy who are already not paying their fair share.

Chaulk this up as another Trump First 100 Days Fail.