The New York Times counted the number of days that the five House and Senate committees directly involved in drafting legislation held public hearings or markups, as well as floor activity such as debates and consideration of amendments, in both chambers.

For the Republican bills, “the House committees held four hearings and the Senate committees one related to health care changes, all before a bill was drafted. Neither the House Republicans nor their Senate counterparts held a hearing on their versions of the bill before unveiling the legislation.” This is just the wrong way to legislate.  At hearings on actual bills, “there are experts testifying who bring different points of view,” said Allison Hoffman, a health care policy expert and law professor at the University of California, Los Angeles. “You see problems that wouldn’t come up otherwise, problems that when you’re 13 men behind closed doors you may not surface on your own.”

And that’s another problem, Mitch McConnell’s so-called “working group,” was all men, drafting legislation to cut women’s access to care.

But even those men didn’t have access to the drafting process. Senator Mike Lee of Utah, a member, said even he had not seen a draft of the bill two days before its release. The drafting was left to staff — mostly 20-something political aides who may never have even made a health care claim, much less suffered a disabling medical condition. 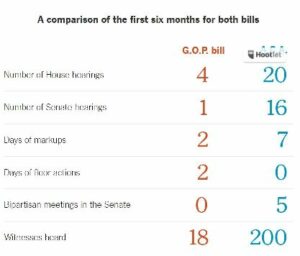 This is no way to create a law that will affect 20% of the U.S. economy and tens of millions of lives.