Senate Majority Leader Mitch McConnell is hoping to rush through Neil Gorsuch’s confirmation process this week. Gorsuch’s extreme record has left him short of the 60 votes traditionally required to confirm a Supreme Court nominee. Instead of admitting defeat and requesting a more mainstream nominee (as his predecessor did when George W. Bush nominated and then withdrew Harriet Miers), McConnell is now threatening to invoke the “nuclear option” of changing the Senate rules to eliminate the filibuster and ram Gorsuch through with fewer than 60 votes.

Many Republicans are very nervous about destroying years of Senate standard practice over this one vote—and they should be.  The message this week is simple: if your Supreme Court nominee is so extreme that he can’t get to 60 votes, you don’t change the rules, you change the nominee!  Kagan got 60 votes, Sotomayor got 60 votes — Trump’s nominee should meet that hurdle, too.

Want more information about how extreme Judge Gorsuch is? Just read Senator Claire McCaskill’s Medium post from last Friday where she announced her decision not to vote for him.

Our Senator John McCain is among the ten Senators who are rumored to be “feeling nervous” about following Mitch McConnell over the cliff to the nuclear option. Contact Senator McCain and ask him not to vote to change the Senate rules for this extreme judge:

Also, contact Senate Majority Leader Chuck Schumer and tell him you stand with him this week as he leads the filibuster: https://www.schumer.senate.gov/contact/email-chuck

Finally, go to Senator Claire McCaskill’s Medium post and “heart” it and share it far and wide. 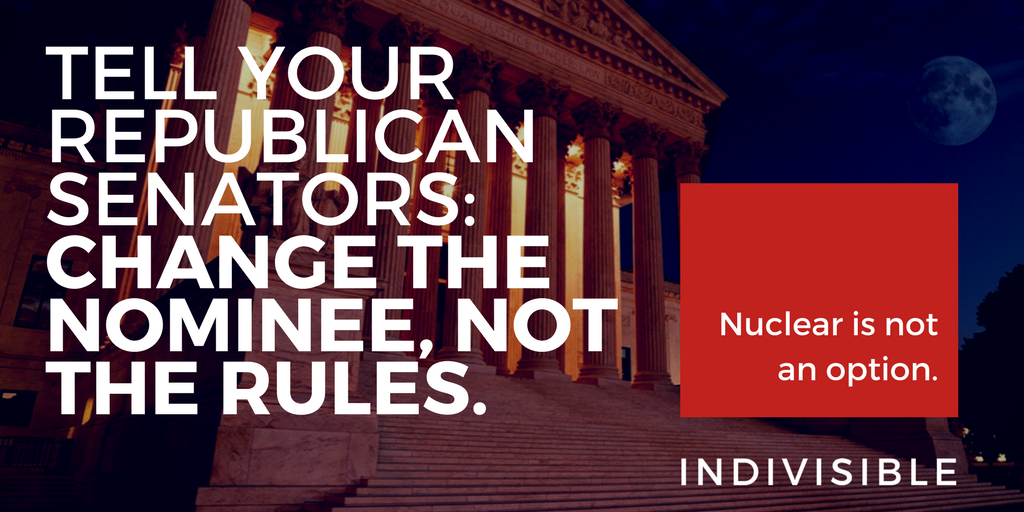