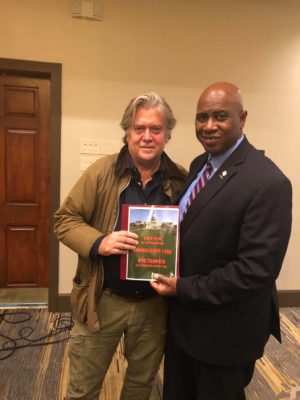 Steve Bannon — the Master of Chaos and Trump champion in the 2016 Election — seems to be messing with our very own LD-6 Legislative Race. He appeared in Flagstaff last night with Republican Candidate for LD-6 House, Walt Blackman. Blackman is running with Incumbent “Where’s Bob” Thorpe and against our candidates Felicia French and Bobby Tyler for the two House seats in the district. Bannon’s presence in this race highlights the national importance of flipping the Arizona Legislature from red to blue and the key position of LD-6 in making that happen.
Steve Bannon’s political arm is spending $3 million on digital ads targeted at getting out the vote ahead of the midterms, according to Bannon as reported by ABC News.  The new push, just three weeks before the midterms, is funded by Bannon’s new outside political group, a 501(c) 4, called “Citizens of the American Republic” that he formed in August.  Hiding behind a 501(c)(4) has become a popular way for unpopular people to spread money around in politics.
According to ABC News, Bannon will be out on the campaign trail stumping for Republican candidates who are considered vulnerable with the message that even though President Donald Trump isn’t on the ballot, the midterm election is a referendum on his presidency. Bannon will be traveling to 10 states including Virginia, New York, Pennsylvania, Kansas, Michigan, Arizona, Iowa, Minnesota, Texas, and Florida, with a message that the president is at war with the Democrats.

And, Bannon’s brand of social media trash advertising will be invading LD-6, according to ABC News. Don’t be fooled by his alt-Right-financed fake news.

Photo from Walt Blackman’s Facebook Page. (According to comments there, it was taken in Flagstaff at the Doubletree on 10/21/2018.)