Newsweek just named Jeff Flake and John McCain as two of only a small handful of Senators who could kill Trump’s terrible tax bill. These are our Sena 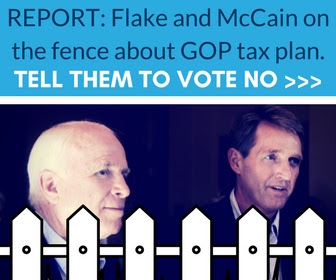 tors and they will listen to YOU more than anyone from any other state. Call, write, and Resistbot (Text 504-09) or fax.

Tell them to get off the fence and onto the side of the Middle Class.  Share a personal story or ask them to just say no to the unfairness of this bill.

While millions of Americans would pay more in taxes, the Republican tax plan provides trillions of dollars in giveaways to wealthy corporations and billionaires.

House Republicans want to increase the budget deficit by up to $2 trillion to pay for tax breaks for corporations and the very wealthy.

While the rich get a massive giveaway, Republicans are throwing working people and families under the bus by cutting Social Security, Medicare, Medicaid, education, and other programs Americans rely on.  Watch Sen. Claire McCaskill do the numbers.