DACA – Deferred Action for Childhood Arrivals, should not ever have been an issue. There is no justice, no fairness, in deporting persons who were brought here by their parents when they were children. There is no strategic interest of the United States in deporting these 800,000 or so. There is no reason whatsoever to do this. In fact, there will be actual harm to our economic and social interests if such deportations take place.

But there is a problem. The original protection was by Pres. Obama (as Congress could not pass anything), so now Trump can nullify that with the stroke of a pen. Word is that he will do that on Tuesday.

Congress can fix this problem by granting a path to citizenship for all these persons – and they can do it now. There are Republicans and Democrats willing to support legislation that will protect the so-called “dreamers” from DJT’s deportation notice. It is expected that legislation will be introduced this week, so please send an email or make a call NOW.

Remind Governor Ducey that eliminating DACA will cost Arizona millions of dollars. Tell him to get on board with other Governors who oppose DACA repeal. 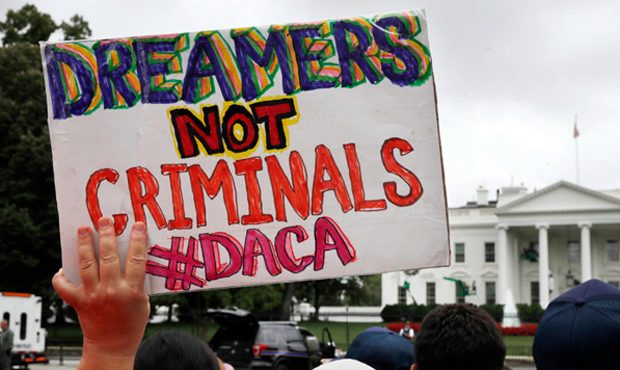 In response to the Trump’s administration decision to rescind the Deferred Action for Childhood Arrivals (DACA), created by President Obama in 2012 to protect immigrants who came to this country as children, Arizona Democratic Party Chair, Alexis Tameron, released the following statement:

“Donald Trump’s actions today are cowardly, foolish, cruel, heartless, mean and immoral. By bending to the wishes of his alt-right base, the Trump’s America is essentially turning its back on nearly 1 million young people who only know this country as their home, leaving them at the peril of a zealot’s Gestapo-like tactics.

“Trotting out the Attorney General, himself a historical lightening rod of discriminatory strife, to tout “the impartial rule of law” has nothing to do with any sort of impartiality or rule of law, and everything to do with the Trump Administration’s anti-immigrant policies.

“Mr. Sessions had the audacity to justify the end of DACA by saying that “societies where the rule of law is subject to political whims and personal biases tend to become societies afflicted by corruption, poverty, and human suffering.” You’ve got to be kidding me! This is two weeks after President Trump pardoned their campaign buddy Joe Arpaio, who was convicted of violating a federal court order after his continued unlawful and racist persecution of our community.

“To then go after young kids who continue to contribute to our country, serve in our military and defend the very freedoms on which America has been built, the “rule of law” argument used so flippantly by this Administration is convenient, cowardly and a whole lot of crap.

“We join the majority of our country in proudly standing with the nearly 30,000 Arizonans currently covered by DACA. We believe in you, your dreams and your future here in our country. We will continue to work with our Democratic elected officials – and sensible and compassionate Republicans – to fix the broken immigration system, pass the DREAM Act and to keep our communities and families together. You and your contributions to our country will not go unnoticed. We will rise up together.”