Here’s what a small town newspaper in the heart of the Republican sector of LD 6 had to say last week about our LD 6 Republican legislators, Sen. Allen, Rep. Thorpe (aka “Missing Bob“), and Rep. Barton (emphasis ours):

“… all three voted for vouchers — which will probably do even more damage to public schools in Arizona than our indifferent Legislature has done to this point by ensuring we have among worst-funded schools in the nation.

“If they were parents of struggling children — that vote would take them from neglecting their children to outright abuse. Hard to know whether neglect or abuse does more harm to a child — but the combination is terrible.

“The roughly $5,000 voucher will pay less than half of the tuition at your average private school. So only parents who can fork out another $6,000 per child to cover the balance of the tuition can afford to take the voucher.

“Mind you, this abusive decision to divert millions of dollars from public schools follows years of shameful neglect. Arizona year after year has starved our schools for resources — cutting per-student funding to 40 percent below the national average. We rank somewhere between 48th and 50th nationally.

“In the meantime, lawmakers have heaped one mandate after another on public schools, most of them more of a burden than a help.

“You’d have thought legislative educational abusers like Thorpe, Barton, and Allen would have been happy just to starve public schools and nurture charter schools. After all, publicly funded charter schools already give parents a choice. Granted, they don’t have to follow a lot of the burdensome rules that shackle public schools and aren’t nearly as accountable financially. And it’s also true that they add lots of fees, skip things like buses and have had the effect of increasing racial segregation almost everywhere they operate, according to an investigation by the Centers for Investigative Journalism. But at least charter schools remain public schools.

“Not so voucher schools — or whatever else the parents do with the taxpayer money they take. So now a Legislature that has insisted on school ratings, legislated the number of periods in the day and heaped on layers of expensive oversight wants to give away a virtually unlimited amount of taxpayer money with no strings attached.

“And so neglect degenerates into abuse.

“But we’ll say one thing for the vote to cannibalize our public schools. 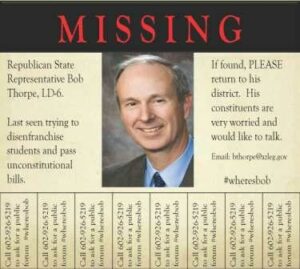 “This vote strips away all pretense.

“So just make a note.

Thorpe is missing in action for his constituents, but his presence in the legislature is deadly. We need to say “Bye-Bye” to Thorpe, Allen, and Barton in 2018.

Read the full article from the Payson Roundup here.